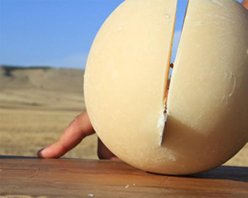 Pallone of Gravina is a Slow Food Presidium recognized in 2012. The rule provides that the product must season for at least four months.  The Seasoning of our Balls takes place in the cellar. In this way, the Pallone di Gravina acquires flavors and wonderfully enveloping and intense aromas. In 2016 the comune of Gravina made an application for the cheese to receive PDO status within the European Union.

WHAT IS THE GRAVINA PALLONE

Pallone of Gravina is a semi-hard cheese made of spun raw dough, made with whole raw cow's milk or pasteurized. Coming from the area of Gravina, it is currently produced in the area of Gravina in Puglia, Matera and the Murgia. In August of 2010, it has become a "Regional Traditional Food" through review by the Ministry of Agriculture. In October 2012 it became, instead, a Slow Food Presidium (The Slow Food Presidium support small traditional products at risk of extinction, protect territories, recover ancient crafts and processing methods, safeguard native breeds and varieties of vegetables and fruits ).

THE ORIGINS OF THE GRAVINA PALLONE

The chain of milk processing in Gravina and the territory of Alta Murgia represent an ancient tradition. In fact, Gravina was important station on Bradanica-Tarantino tract. All the milk capacity that came from cattle was used for the processing of sheep's milk cheese and vaccines with the production, especially, of spun paste. Important examples are the fresh dairy products: mozzarella, mozzarella, stracciatella, knots, braids, manteca (burrino) and burrata; but also and above all the Pallone of Gravina.

The origins of milk that have created Pallone are padolians. More information about the Pallone of Gravina can be found in the agrarian encyclopedia of the kingdom of Naples of 1859 that, in fact, cites the Pallone of Gravina referring to its preparation. There are also other references in "Finanche come le Lectures on Agricultural, Chemistry and Geology" (Edinburgh and London, 1847), which cites the Pallone of Gravina as one of the most popular cheeses and valuable of southern Italy, at the time of Kingdom of Two Sicilies. In the year 2012 was created the Slow Food Presidium Pallone di Gravina, thanks to the efforts of the producers, the local Slow Food Association.

THE PRODUCTION OF PALLONE GRAVINA

In recent years, production has been concentrated in the province of Matera, however, the ancient recipe of the Pallone is still alive in the

Murgia and Gravina of Puglia in particular. The production technique is similar to the caciocavallo cheese: clotted milk with calf rennet liquid or paste of lamb or kid and after having acquired the curd, is collected and is made to be stationed on tompagno. When the paste has reached the desired acidity, generally after two or three hours, it is cut in slices and row with hot water. In the forming step, the paste assumes a spherical shape. After the salting  the Palloni  are placed to dry for about 15 days in the same place of production and then dried in the cellar.

The rind is tough smooth, sturdy, straw-colored tending to brown or gray-brown as it matures; the paste is spun, raw, smooth, straw colored tending to golden with aging, with possible slight holes. The weight varies from 1.5 to 2.5 kg. It is consumed at the table as an appetizer, as a relish: very popular is the provolone sandwich (pallone) and mortadella in Puglia and Basilicata. It can be dissolved to garnish or bestow more flavor to dishes. It can be eaten fresh, already after just 20 days of its production, but it is especially appreciated if is seasoned at least three / four months. The seasoning allows him to gain more spiciness and value. The Pallone of Gravina is produced from January to March, it is great after three months of seasoning although the rule that everybody respects, indicates that the first four months of seasoning the product can’t receive the stamp "Slow Food".

The Pallone of Gravina in Cheese Dairy Derosa Brothers, Slow Food Presidium, it is seasoned in the cellar at a temperature not mechanically controlled. Therefore its taste is very strong and definitely and  this particularity gives an added value which is appreciated by all. Why just in the cellar? because we want to respect the historicity of the product . In fact, in ancient times the pallone was seasoned  in the cellar or cave, acquiring a strong and inimitable taste, and not in refrigerator.

Thanks to this, the pallone is selected from known restaurants but not only, for renown importance dishes. The production of Pallone of Gravina - Slow Food Presidium, from the Cheese Dairy Derosa Brothers, goes up to seasoning of 12 months. In this case the product is of high quality.

PALLONE OF GRAVINA FROM THE CHEESE DAIRY BROTHERS AWARED

The "GourmArte" Commission (www.gourmarte.it), chaired by Elio Ghisalberti, responsible for the selection of products called to represent Puglia in the field of agri-food in its fourth edition GourmArte, has indicated "Pallone of Gravina" from  the Cheese Dairy Derosa Brothers as " Witness for Excellence” and then assign the Award " Guardian of Taste 2015 ". An important recognition at national level.

The  Cheese Dairy of Derosa Brothers is one of the actors, as well as of the authors, of  the Iter  procedural to the request of PDO. for the Pallone of Gravina. The acronym PDO (Protected Designation of Origin) designates a product originating in a region and a country, whose quality and characteristics are essentially or exclusively due to the geographical environment (a term that includes natural factors and human ones). The path to certification Protected Designation of Origin will be long, as it takes years and constant work at both national and European level, but we believe in the project as we strongly believed in the Slow Food certification; certification that came in 2012. 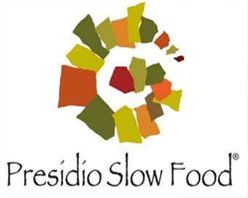 The Slow Food Presidium project started in 1999 as a natural evolution of the Ark of Taste for the recovery and preservation of small productions of gastronomic excellence threatened by industrial agriculture, environmental degradation, homologation

Il The Pallone of Gravina is a Slow Food presidium recognized in 2012. But what is an Presidium? Presidiums are those products from the Slow Food Foundation for Biodiversity onlus, that in its valuation uses experts in various disciplines. Characteristics of each Presidium Slow Food: The risk of extinction, real or potential.

The binding to the memory and identity of a group, the Slow Food Presidium products must be native ecotypes or varieties and traditionally grown in the production area, with unique characteristics due to binding to a specific cultivation area and have developed due to the strong conjunction with the soil and climatic conditions of a particular area.

The bond with the territory demonstrably: the product must be linked to a specific area from an environmental point of view, the historical and socio-economic. Producing limited quantities, in accordance with traditional practices, from farms or small-scale processing. The great organoleptic quality and their validity also in the environmental and social sense, because only meeting even these last two items you can guarantee the pleasure of taste that is the foundation of the philosophy of Slow Food. Each product specification of a Presidium must meet specific guidelines, different for the various types of products. And it is for this reason that the products "labeled" Slow Food is a superb quality.